Accessibility Issues
(Being Disabled In an 'Abled' World)
Being ambulatory one can never comprehend the challenges encountered by those physically disabled. While society tries to accommodate those physically challenged either through genuine altruism or simply to comply with laws and regulations, efforts often fall short.

In my short time bound to a wheelchair I have encountered numerous frustrations with those claiming to be wheelchair accessible. The problem is often not discovered until on site and perhaps too late to turn back or make alternative arrangements. Time is wasted, frustrations mount and damage can occur to both the chair and the environment.

Situations encountered have included;
In My Workplace;

As mentioned in a recent post, I've returned to work for the first time post injury. An ergonomic consultant was called in to assess the workplace as to my needs, however they could have saved their money and relied on common sense. (Legal issues probably required the assessment.)

First off, after the medical reality, one is only as disabled as you yourself and those around you allow you to be. If changes are made so that I don't have to stretch, reach, bend or navigate to perform my duties, I won't. Maybe I'd like to. I feel this is different from the situations I mention earlier in this post. Automatic or assisted doors, the size of hallways, the placement of actuator switches and the behaviour of people towards the disabled frustrate me as general problems, which should be regarded as problems for people with a wide variety of disabilities, often more challenging than mine.

In my workplace, I think an initial assessment of what might constitute physical barriers preventing me from doing my job and what might be safety issues, would be all that is necessary. Other problems could be dealt with if and when encountered. I would far prefer to figure out how to do a task as it has been set up and as performed by all my co-workers rather than to be catered to and have exceptions to the rule made to accommodate me. In other words - let's see if a problem actually exists before we start changing things!!!

Working in a hospital laboratory, clutter seems to be inescapable. Work always expands to fill the area available. Every laboratory I've ever worked in was filled to capacity with equipment immediately on occupation. There is little room for expansion and items are often stacked upon items. In my situation, aisles are narrow, biological discard bins hover around the floor, migrating to where needed. Colleagues sit on the edge of their desk chairs to lean into their work with the rest of the chair projecting into the middle of the aisle. When co-workers stand up, the chair is usually abandoned in the middle of the aisle until their return. Pushing the chair back in under the bench is only common courtesy towards all workers but of course it often falls victim to human nature and the hectic workplace pace. Minor nuisances and all forgivable.

Still, the laboratory workplace is a minefield of obstacles when navigating the floor. All other issues I believe I can deal with without additional aid. As I can stand and reach, no item is beyond my reach and need not be moved down to chair level.

Below are a few pictures of the floorspace I have to navigate with my wheelchair to maneuver around. 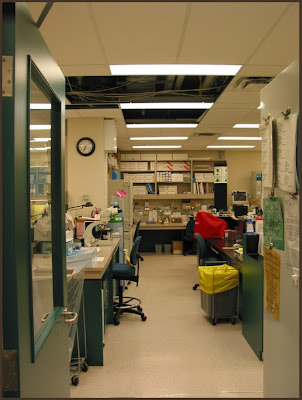 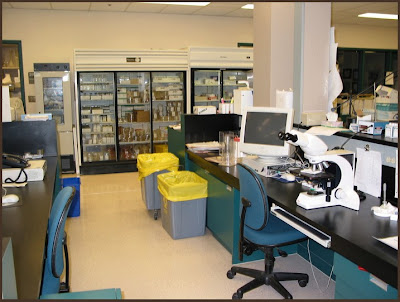 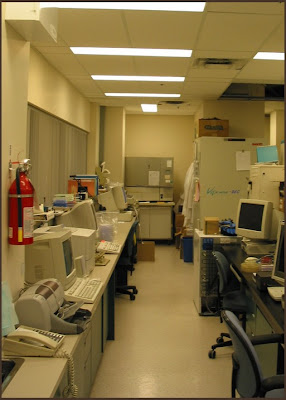 Chair legs protrude out even when rolled under workbench 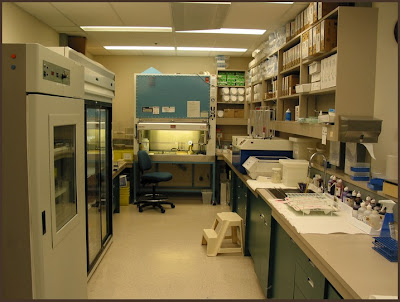 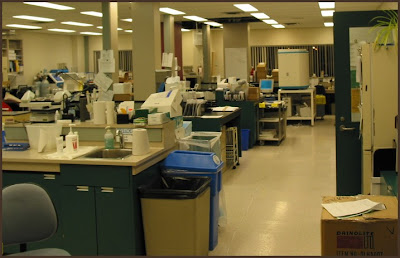 Abandoned Chairs, Garbage Bins, Recycling Bins, Carts and Boxes
When in their proper place, these items shouldn't present themselves as obstacles but as many items slide or are on wheels, they tend to migrate around the room where needed and often are left abandoned or protruding from the workbenches. A minor inconvenience but does slow things down particularly if I'm carrying items in one hand while operating the joystick with the other. Have to kick things out of the way or free up one hand to deal with the obstruction. Where others can turn sideways and squeeze through, I cannot.

Colleagues have been very accommodating, but this is the real world and chaos often triumphs over order. Regardless, it's great to be back!
Posted by Yuri at 16:16

All the best for you!
be strong!
Cheers from Argentina!
Marcelo.