In my previous post I wrote about the power issues which suddenly developed in my Quantum 6000 power wheelchair.

Today marks a month to the day since the power issue was supposedly diagnosed and solution (replacement parts) recommended.  The technician arrived and replaced the suspect parts yet the problem remains. 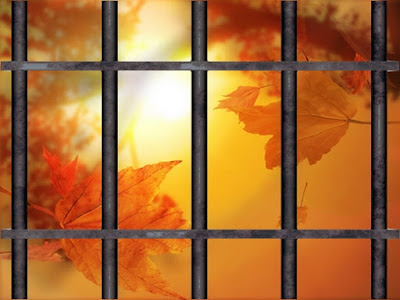 Will I also be a prisoner of Autumn?
I was a prisoner of summer from June 27th through to today, July 27th.
After waiting one-twelfth of a year (one month) for repairs --- and after a $921.00 replacement joystick (plus labour), the original problem remains.

To quickly review:  My Quantum suddenly developed power issues most noticeable when climbing the ramp to my home.  Where before it barely slowed when on the incline, suddenly it struggled and I had to compensate by pushing the joystick to the left.

The tech(s) (it took two) who diagnosed the problem inspected and measured the motors and said they were within factory specifications.  I was told the problem was the joystick which may not have been telling the motors to apply full power when pushed forward to the max.  I may have had to push the joystick to the left because the joystick's gimbal was no longer centered --- or such explanation.

I had once crunched the cord connector linking the joystick to the electronic control module at the rear of the powerchair.  Still, I had taped it up securely and it never failed to provide an electrical connection.

I had my doubts as to the joystick causing the power issue as the Quantum had plenty of speed and power when not on an incline. 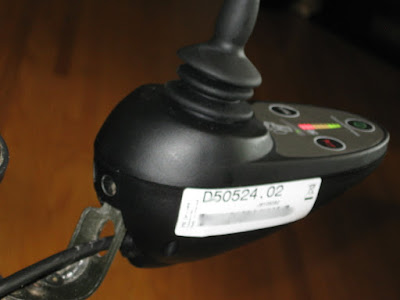 New $921.00 Cnd. (plus labour) joystick did not solve the power issue as the technician's diagnosis suggested.  A month later, back to Square One!

As the Quantum powerchair was being returned for my assessment, the technician noticed some damage to a motor brush housing which had not been noted by either technician, a month ago when one of the fellows tested the motors.  How this damage could have occurred is puzzling as the motor brushes are virtually flush with the motor itself and protected by the tire on one side and the lever which engages the motor on the other side. 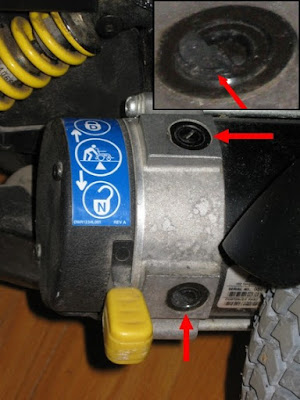 After completing repairs which did not solve my power issue, the technician noticed that one of the motor brush housings was damaged --- not noticed a month ago when they examined and measured the motors,  The red arrow at the bottom shows the damaged brush housing or plug which holds one of the brushes against the motor thereby providing power.  At the upper right of the photo is an enlarged view of the damage (arrow -half broken away).  The remaining arrow, pointing left, shows what an undamaged brush housing looks like.  The logical and sane solution would be to unscrew and replace all (4?) brushes per motor with new ones.  The repair would cost a few dollars (before mark-up by the greedy health care and manufacturing system!

So, the only recourse I was offered was to purchase a new motor to replace the damaged brush housing (for lack of a better description).  I was told the brush could not be replaced as they don't make replacements.  (how about an old discarded motor?)  To replace the brush --- you replace the whole motor.


Can you imagine having to replace your car's motor because you need new spark-plugs???  Urgh%#@*!

Not only that, but if one motor is worn --- or is failing, the other probably is reaching the end of its useful life.

This chair is my legs!  I have no choice but to order two new motors (about $!K each) after paying $921.00 for a joystick which I may or may not have needed.  Will it take yet another month (up to September) to get the motors?