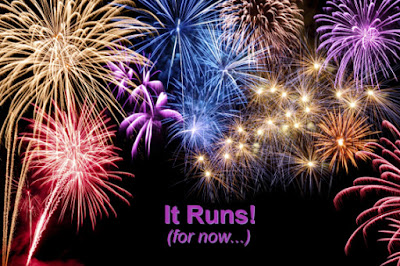 Anyone following this blog knows of my persistent problems with the Permobil M-300 motorized wheelchair.  Virtually every part of it had to be replaced  starting within months of purchasing it and with additional problems occurring every year thereafter.

Both motors died within months of each other and a replacement motor had to be returned as it failed to operate properly.  The electronic 'brain' or control unit also died and required replacement.

Still with all this done, one Permobil wheelchair motor would periodically cut out - that is, would not receive power.  This usually occurred while I was attempting to reverse.  With one wheel powerless, I could only turn in circles about the stationary wheel.

The temporary solution my service provider found was to unplug the wiring harness connector from the motor not receiving power, wait a few seconds and then to reconnect the connector.  It seemed to solve the problem temporarily - like rebooting a computer.  Still the problem remained as it would cut out every few days.

The good news is that it seems to have corrected itself for about the last ten times I attempted to use the Permobil, it has run without any problems.

Still, it remains unsettling for if a specific problem was not found and a specific solution found, I operate the chair hesitantly, waiting for the next occurrence of the same problem.  It doesn't ease the mind when something fixes itself.  Why and how long are questions that come to mind.