If My Foot is Itchy.....I Just Scratch My Butt for Relief!!

My spinal cord injury was not due to some physical trauma such a crushing or shearing motion.  Mine was damaged by infection: by Staphycoccus aureus bacteria which somehow got into my body and evaded my immune system's attempt to destroy them.  Once they took up residence on my spinal cord, they began living on the interstitial nutrients and they "crapped" out a variety of enzymes whose purpose is to further break down their surroundings for further nutrients (food) and to destroy or evade the body's immune response which tries to destroy the bacteria.

These enzymes have left my spinal cord physically intact for the most part, however the enzymes have fused some of the cord transmitting fibers or elements together resulting in electrical shorts or 'cross-talk'..

To simplify, if the spinal cord consists of transmitting fibers or elements, say lettered A to Z, which conduct the brain's commands to the lower body and relay sensory (and other) signals back up to the brain, some of mine have short-circuited.  Where A should continue along as A, B as B, C as C and so forth to Z, mine have been stripped of the electrically insulating myelin sheath and have fused back together in some other order. 'A' may now connect to C and D connect to F, G & H, while E may no longer connect to anything.  In my case 'Butt' is connected to 'Foot'.

It would be something like pouring some solvent over a bundle of wires (or perhaps burning the covering).  The plastic insulation surrounding the transmitting wires would melt and drip away exposing the metal core.  Metal transmitting cores can now touch one or more adjacent metal cores thereby short-circuiting the spinal cord transmission system.  This is what has happened to me. 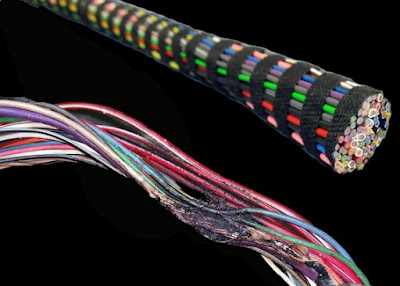 The intact bundle of electrical conductors at top represent an intact spinal cord; a bundle of transmitting fibers or elements.  An injury resulting in the total severing of a spinal cord might be represented by the end of the top bundle where the conductors are sheared off exposing the ends and any signal transmission ends.

My injury is more like the bundle at the bottom where a solvent or overheating has stripped the insulation from the conducting fibers resulting in short-circuits.  Conductors are for the most part intact but the transmitting surfaces touch each other and 'cross-talk' or short-circuiting jumbles and scatters the signals. Commands may not reach the proper site for activation and feedback sensations such as pressure, temperature and proprioception may send back erroneous or confused information.

And so it is true.  When I scratch my butt (left cheek), I feel it in the arch of my left foot.  In fact I feel the scratch in both places; in the arch of my foot and at the site on my butt where I am scratching.  The signals somehow merge and a new pathway now exists.  Weird!!